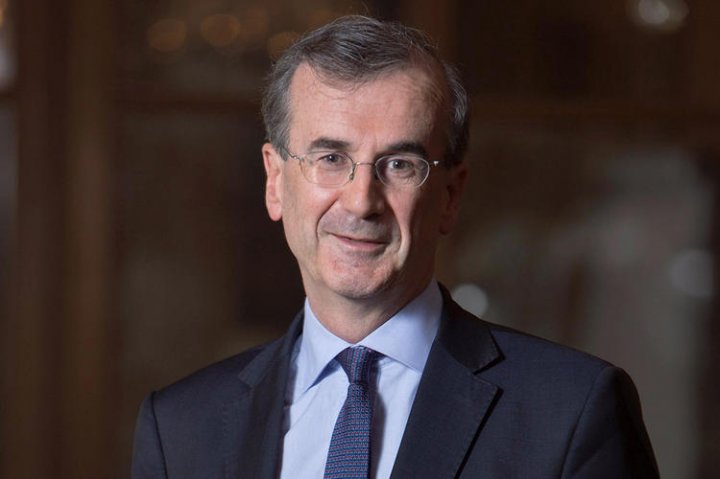 *This Policy Note is based on a speech held by François Villeroy de Galhau, Governor of the Banque de France, at the 2021 Paris Europlace International Financial Forum, 29 June 2021.

European monetary authorities are confronted with the emergence of digital payments which threatens the anchoring role of central bank money. Hence, the Eurosystem needs to be proactive and to act in partnership with commercial banks. We could consider a triangle of actions: ensure that a strict regulation applies to crypto-assets; foster the project of a unified, innovative and autonomous European payments solution; and finally be ready to launch a general purpose CBDC, in case of need.


The Covid-19 crisis is acting as an accelerator for the major structural challenges banks and insurers are facing. These challenges are also putting creative pressure on central banks and supervisors. In this context, I would like to focus on how to catalyse our efforts together with private banks on one “road for the future” towards innovative payments and CBDC.

Once regarded as the "plumbing" behind the financial system, attitudes to a CBDC and to payments in general have dramatically changed over the past 18 months; and these issues are now at the top of the central banking agenda. As is often the case with major innovations, reactions to the idea of a CBDC are very mixed.

I want to start by making one major point very clear on the fact that no decision has been taken at this stage on whether or not to create a digital euro, as part of the investigation phase recently launched by the Governing Council. Before any such decision is made, rest assured that all necessary analysis will be properly conducted. It is with this mindset, intent on supporting innovation but within a framework of trust, that the Banque de France has been leading the way on a possible CBDC over the last two years. The time has come to share some of the main learnings regarding three basic questions: why, how and when.

I. Why: incorporating digital innovations is an imperative
Very strong trends currently apply in the field of payments, which pose a “triangle of risks” on (i) the centrality of central bank money, (ii) monetary sovereignty and (iii) the international role of the euro. 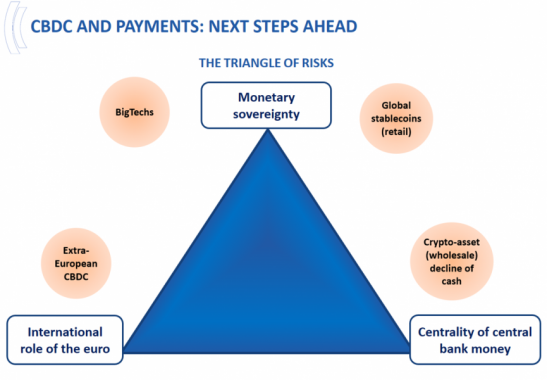 First, on retail payments, over the last 18 months, cash has accelerated its decline while the volume of dematerialised payments has increased twice as fast as before the crisis in France, from 51 % in 2019 to 70 % in the first half of 2021. There is also a strong shift towards the tokenisation of financial assets. This dual trend could lead to the marginalisation of the use of central bank money, be it in the form of banknotes or in settlement systems. We, as a central bank, shall never abandon cash; but this commitment cannot be our sole response to technological change. Second, the emergence of BigTechs and new settlement assets (crypto-assets and stablecoins) could threaten our monetary sovereignty and our mandate to safeguard financial stability. Third and final factor, the progress made by extra-European CBDCs and notably by the digital yuan, already accessible in the major Chinese cities. The risk is clearly that Europe will lose momentum not just in its drive to strengthen the international role of the euro, but even in preserving it. The challenge here is also a geopolitical concern.


II. How: reasserting the anchoring role of central bank money thanks to a holistic approach

Faced with these challenges, we want to be proactive and move forward in partnership with commercial banks. I would like to stress that a CBDC would be created with banks, not against them nor in spite of them. In the digital universe, a CBDC can help to preserve the complementarity between central bank money and commercial bank money. Failing this, commercial banks will face a difficult challenge competing with the BigTechs and their unrivalled resources and network effects, and with private stablecoins. With that in mind, we could consider a triangle of actions in response to these contemporaneous trends. 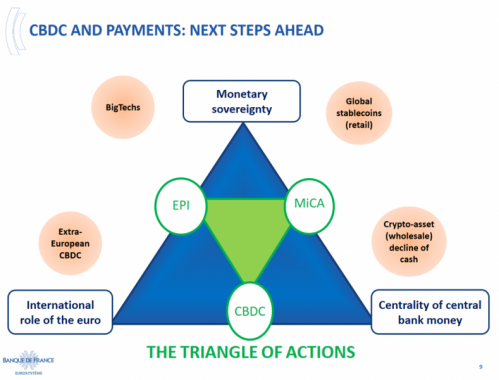 The first action in response to the risks posed by private stablecoins is of course regulatory. Our main challenge is to avoid regulatory arbitrage, where players relocate to other jurisdictions to circumvent regulations. We must ensure that all countries apply strict regulations regarding crypto-assets, and that no stablecoin arrangement enters into operation without having fully met the regulatory expectations. The European Union has been a pioneer in this field, putting forward last September a proposal for a Markets in Crypto-Assets regulation (also known as MiCA). I sincerely hope the EU shall adopt this first harmonised regulatory framework in the coming months. If it modifies the Commission’s proposal, it should only be to strengthen it. Crypto-asset issuers and entities providing additional services, such as transfer or custody, will in particular have to provide a predictable redemption right in sovereign currency for asset holders. They will also be subject to uniform requirements across the EU and act under the watch of supervisory authorities, from whom they will have to obtain prior authorisation. At international level, there should be an efficient cooperative framework adapted to the diversity of risks and challenges raised by stablecoins.

The second action is to foster the major private project to create a unified, innovative and autonomous European solution, the European Payments Initiative (EPI). The Eurosystem has supported it right from the start. Concretely, EPI will provide citizens with an innovative and competitive European payment solution, as an alternative to the dominant and extra-European players already established in Europe or the BigTechs in the future. EPI will be a company based within the EU, controlled by European authorities: we will thus have greater control over its risks, its economic model for meeting European consumers’ needs, and how it uses its data.


I strongly commend those who are driving the EPI project, and encourage them to implement it as quickly as possible. We need to speed up Autumn 2021’s “go/no go” decision stage and the governing bodies also have to be put in place as soon as possible to help EPI deploy on a pan-European scale. Public authorities are and will remain completely committed in their support: the European Commission, in order to validate the economic model; ministers in the different countries – starting with France and Germany. We as Eurosystem are committed to providing the underlying settlement infrastructures, including TIPS, which is a powerful European asset. And EPI will be most welcome to participate in the front-end prototype of CBDC. But I must stress the urgency here: we don’t have much time left, one or two years. Everybody is talking about a CBDC; but first, and much earlier, we need to regulate crypto-assets, and then implement EPI.

The third and final action is to be ready to launch a general purpose CBDC, to reassert the anchoring role of central bank money in case of need. The next investigation phase and technological prototypes selected by the Eurosystem will cover this aspect and provide a new form of the Single Currency for all citizens. That being said, the Governing Council shall also study the capacity to develop new uses, possibly for all types of actors, in the future, for instance for cross-border payments.

The results of the ECB’s public consultation, published mid-April, show that European citizens regard two aspects as particularly important: privacy and security. Therefore, the retail CBDC would be made available to citizens as an easy-to-use, secure and accessible payment instrument, that protects user privacy and can be used for all types of payment. How would it be distributed? We want to develop a model where CBDC is distributed by intermediaries, to allow private players, first and foremost the banking sector, to keep a key role; it should be clear that it is not the Banque de France’s or any Central Bank’s role to open bank accounts, as we closed the last ones almost 20 years ago! Client relationships will remain the preserve of private players, to which central banks will provide the central bank money. There are also fears that CBDC accounts will “drain” commercial deposits and dry up bank liquidity. In my view, these fears are totally ungrounded: CBDC accounts will offer no greater advantage in terms of remuneration, and there will have to be a limited amount that can be held in them. In addition, the ECB has shown that it is more than capable of safeguarding bank liquidity. If the CBDC is going to replace any liquid financial assets, then it is more likely to be banknotes in the long run and crypto-assets. In short, the scenario of a CBDC causing massive bank disintermediation is more a finance-fiction fantasy than a serious analysis.


The “interbank” or “wholesale” CBDC would enable the efficient and secure settlement of transactions. We, as Banque de France, have already completed seven experiments and will carry out two more by the end of this year, with private and public actors alike. We will publish in September a comprehensive stocktaking. Three lessons can already be drawn:
III. When: getting ready to introduce a CBDC rapidly if necessary
We therefore need to prepare ourselves, without hesitation, to introduce a CBDC rapidly if necessary.
The Governing Council has given the green light to launch an investigation phase for a digital euro project, which will begin in autumn and last until 2023. At that date, the Governing Council will decide on whether to launch a digital euro. We will then need about three years of serious preparatory work to turn an e-euro into reality.

On both digital currency and payments, we in Europe must be ready to move as quickly as needed in order to avoid an erosion of our monetary sovereignty. European citizens must have access durably to effective and independent means of exchange. Recent experience in another field shows that we can do it. Six years ago, there was almost no climate policy among central bankers. Today it has become an important topic with concrete technical advances.

I could have mentioned another “road for the future”: green finance. Here also, France and Europe have a strong initial advantage: Paris is home to the global secretariat of the NGFS with about 100 members now; its financial centre participants are ahead in their disclosure of and commitments regarding climate-related risks; France is the first European country in terms of outstanding of green bonds. In May, the French ACPR published the first climate pilot exercise worldwide actively involving both the banking and insurance sectors.

In conclusion, Keynes reminds us that: “The importance of money flows from it being a link between the present and the future”.6 And our duty, as guardian of the currency, is precisely to bolster confidence, which is key for innovation, and to lay the ground for the future. Confidence first and foremost in the currency, be it a banknote, an electronic or, maybe tomorrow, a digital currency. Confidence, as well, in the ability of financial institutions to finance the economy in Paris and in Europe. ∎