by Michael Chui and Christian Upper, Bank for International Settlements 1

China’s shadow banking sector has grown considerably in recent years. The size differs due to the variations in the definition, but most estimates point to an uninterrupted trend growth. For example, of the aggregate financing data published by the People’s Bank of China (PBoC), the three items of credit intermediation relate to entities (fully or partially) outside the regulatory banking system – entrusted loans, trust loans and undiscounted bankers’ acceptances – totalled RMB 26 trillion (USD 4 trillion) at end-2016, up 64% from end-2012 (Graph 1, left-hand panel). Moody’s defines the PBoC’s data “core shadow banking activities” and adds other types of credit (dominated by wealth management assets) to its shadow bank definition.2 On this basis, the size of China’s shadow banks grew by almost 170% over the same period to RMB 65 trillion at end-2016 (Graph 1, centre panel). Even taking into consideration China’s rapid economic growth, the doubling of the size of the shadow banking sector in terms of GDP between 2012 and 2016 was quite remarkable. We also adopt the shadow bank definition used by Zhang et al (2014) of the Chinese Academy of Social Sciences and extend the data to 2016, the resulting figures show similar growth pattern (Graph 1, right-hand panel).3

A special feature of the shadow banking sector in China is the role played by banks in funding shadow banking activities. Over the past few years, a number of factors have put banks under increasing pressure to boost profitability. First, the lending and deposit rate liberalisation and competition squeezed banks’ interest margins. Second, the fast growing wealth of Chinese residents led to financial disintermediation with depositors searching for higher-yielding assets. Third, since 2009, the government has launched a series of measures to dam-pen lending to the real estate sector, those industries that cause high pollution and have high energy consumption or suffer from overcapacity. This weighed on banks’ profits as loans to these firms typically were larger and paid higher-than-average interest rates. As return on equity fell sharply over the past few years, banks appeared to react to the decline in profits by boosting their non-interest income activities (Graph 2). Many of these activities reportedly include banks “channelling” funds (either from wealth management products sold or interbank borrowing) through brokers or other financial institutions to the private sector. In doing so, banks circumvent the lending constraints imposed by regulators (eg the loan-to-deposit cap in place up to late 2015 or the capital adequacy ratio) by reclassifying their loan assets as saleable assets or through off-balance sheet operations. In this sense, Chinese shadow banks can be described as the shadow of the banks – quite unlike shadow banking in other jurisdictions, most prominently the United States. 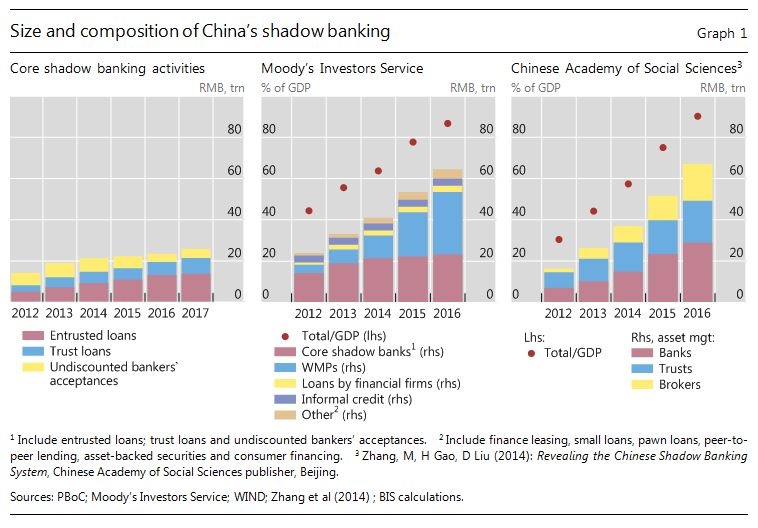 In general, Chinese banks tend to rely on issuing wealth management products (WMPs) directly or through other entities, and interbank borrowing to fund shadow bank activities. In particular, one of the most rapidly growing interbank liabilities have been certificates of deposits (CDs). Since the inception of this market in 2014, the amount outstanding of bank CDs has increased to RMB 8 trillion at the end of the first quarter 2017. Notice that virtually all issuance is by the joint-stock and city commercial banks, the share of the 5 large state-owned banks (red bars) is close to zero. This largely reflects that fact that most deposits are concentrated at the 5 large banks, which also have ample qualified assets that can be pledged as collateral for central bank liquidity. These factors reduce the big banks’ dependency on wholesale market funding. In fact, these big banks are the “net lenders” in the CD markets as they hold a fair share of the outstanding CDs among all banks (Graph 3, centre and right-hand panels). 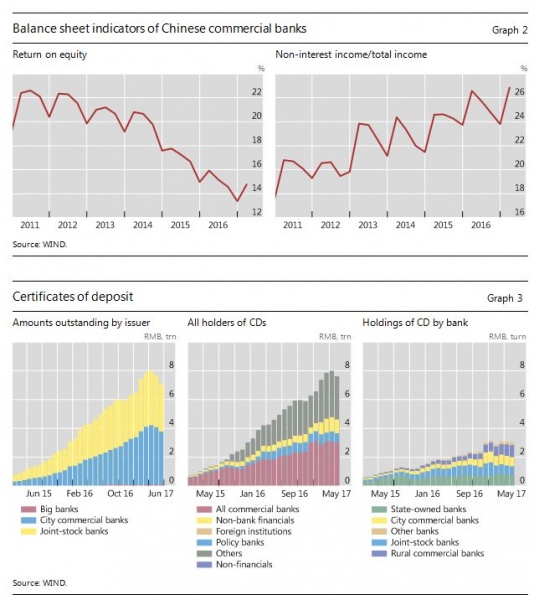 
The authorities’ response to prevent the rapid growth in shadow banks from developing into systemic financial risk is to tighten the regulations on the “fast evolving shadow”. For example, between 2008 and 2014, the banking and securities regulators introduced various measures to make it more difficult for trusts and securities firms to serve as conduits for banks’ channelling business. Starting from 2016, the PBoC upgraded its bank assessment exercise to a quarterly macroprudential assessment (MPA) scheme, which has become an important tool to protect the banking sector resilience.4 For example, in early 2017, the PBoC extended their MPA to cover off-balance sheet WMPs, which are an important shadow banking instrument. The central bank also announced that CDs will be counted as interbank liabilities and subject to a cap from 2018 and that appeared to have dampened the strong growth in bank CDs. Overall, perhaps reflecting the authorities’ efforts, there are tentative signs that the pace of expansion in the shadow banking sector has slowed in recent months. But that could also be caused by the higher interest rates and tighter financial conditions that reduce the incentives to lever up.


Finally, in addressing risks associated with shadow banking, the authorities face a trade-off between financial stability and ensuring a steady supply of credit to the private sector. This is particularly important because lending of the deposit-rich big banks is heavily tilted towards state-owned enterprises, perhaps because of their lower presumed credit risk.

1.   ↑   We would like to thank Torsten Ehlers and Feng Zhu for valuable inputs. The views expressed here are our own and not necessarily those of the Bank for International Settlements.
2.   ↑   See various issues of Moody’s quarterly china shadow banking monitor.
3.   ↑

The authors adopted a narrow definition that focuses on three items: the outstanding amount of banks’ asset management products, total trust assets and total assets under management of securities companies.