The digital transformation is progressing rapidly, and Denmark is among the most digitalised countries in the world – especially when it comes to payments. The widespread use of digital payment solutions should be seen in the context of the broad anchoring of digitalisation across the population where a high degree of public and private-sector digitalisation has increased digitalisation even further. Payment behaviour is also mirrored in Danes’ willingness to embrace new solutions and technologies, e.g. more than one in five point-of-sale payments is a mobile payment, and the take-up and usage of instant payments have progressed fast.

As a result, it is important to recognise that the use of digital payment solutions and legislation on, for instance, usage and access to cash differ significantly across countries. This Policy Brief is a summary of two analyses published by Danmarks Nationalbank and presents the most important insights into payment behaviour, when considering policy implications in the payment space with respect to digitalisation.

Danes are frontrunners on digital payments

The digital transformation is progressing rapidly, and Denmark and the other Nordic countries are among the most digitalised countries in the world – especially when it comes to payments.

The latest statement from the European Central Bank (ECB) concludes that Denmark is the EU member state with most card transactions per capita. On average, each Danish consumer made 379 card transactions in 2020, i.e. more than one card payment per day.1 In addition, more than nine out of ten Danes shopped online in 2021, making Denmark the country with the highest proportion of online shoppers in the European Union, see chart 1, left.2

By way of comparison, 67 per cent of EU citizens shopped online last year, making an average of 142 card payments. 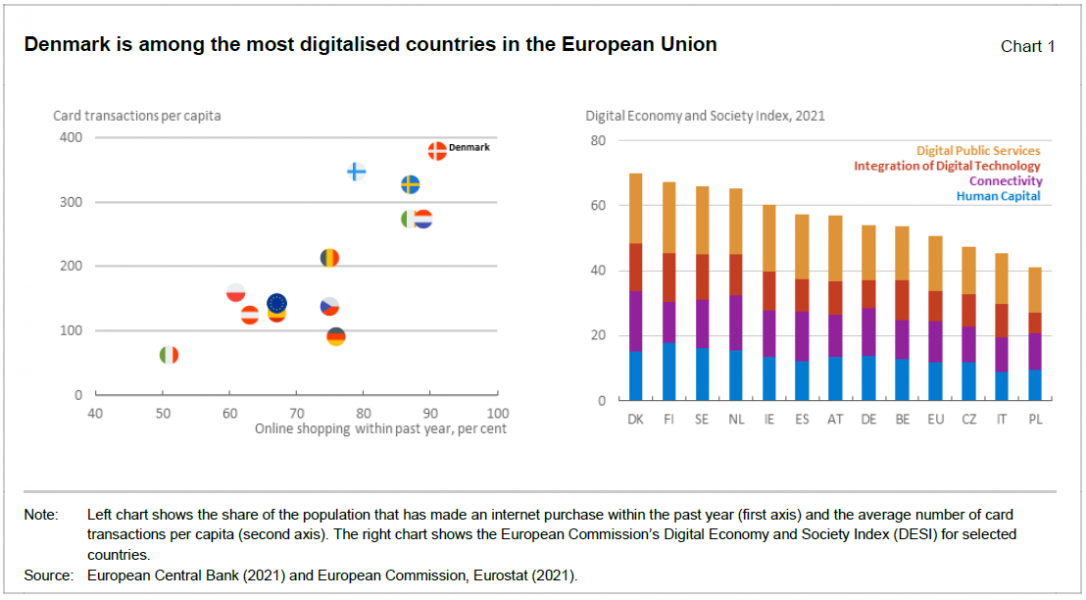 Digitalisation is broadly anchored in the population

The widespread use of digital payment solutions in Denmark should be seen in the context of the broad anchoring of digitalisation across the population. Extensive public and private-sector digitalisation, for instance the prevalence of personal digital IDs, a national digital mailbox system and the statutory requirement that all Danes above 18 must hold a bank account for payments from the public sector, are key elements in enabling digital access to a vast majority of public services online: In 2021, 92 per cent of Danes used the internet to access public services, the highest proportion among the EU member states.3 In addition, more than 9 out of 10 citizens over the age of 15 have a personal digital ID and receive Digital Post from public authorities.4

These factors of widespread internet usage, a high degree of public and private-sector digitalisation and Danes’ digital payment behaviour interact and increase digitalisation even further. As a result, Denmark is the most digitalised country in the EU according to the European Commission’s Digital Economy and Society Index, see chart 1, right.

As more Danes embrace digitalisation, a higher share of consumption and payments also move online. In 2021, e-commerce accounted for a third of total card turnover despite a lack of travel activities due to covid-19 restrictions.

Most payments in physical trade are digital

Danes are relying less and less on cash when paying in stores. Last year, 88 per cent of payments in physical trade were digital, leaving only 12 per cent to cash.6

Overall, age has become less of a factor in cash payments in stores, as Danes over the age of 70 have more than halved their use of cash since 2017, using cash in less than two out of ten payments today. In fact, payment behaviour among senior citizens seems to be a result of preferences for digital payment solutions as stores are legally required to accept cash.7

In other words, the digital behaviour of senior citizens is a key element in making Denmark one of the most digitalised countries, as Denmark stands out from most other European countries, which still rely extensively on cash for payments.8

Importance of cash differs across countries

With Danish citizens’ payment habits in mind, it is important to recognise that the tendency to use cash, digitalisation and legislation on use and access to cash differ significantly across countries.

In Denmark, the decline in cash usage is driven by the choice of citizens as, among other things, the private sector offers efficient, safe and user-friendly digital solutions. Hence, banks have seen a sharp drop in demand for cash services. As a result, the majority of banks no longer offer cash services at the counter. Thus, new solutions for handling cash may be needed to ensure access to cash for less digital and vulnerable groups in the society.

On the other hand, there are alternatives to banks for accessing and depositing cash: Stores are in general required to accept cash, and it is still widely possible to withdraw cash via the ‘cash back’ option in stores. As a result, legislation to enhance the availability of cash services, for instance distance to nearest cash access point, would have only little effect on the use of cash and access to cash in countries like Denmark. In general, the use of cash should neither be promoted nor actively discouraged and cash should be used to the extent that consumers see it as an attractive alternative to other payments forms.

One in five payments in physical trade is a mobile payment

Developments since 2019 show that the popularity and use of mobile payment solutions have grown considerably, driven especially by the under-40s and for instance following the launch of new solutions such as Apple Pay.

Changes in payment habits are also mirrored in Danes’ willingness to embrace new solutions and technologies: For instance, when MobilePay was launched it took only three years for the solution to reach more than half of the population. Another example is that more than half of all card payments were initiated contactless less than three years after the technology was introduced in Denmark.

This willingness to embrace change has undoubtably contributed to taking digitalisation even further within the payment space. It also reflects Danes’ trust in new solutions and technologies across the private sector and public authorities.

Instant payments are among the most popular payment methods in Denmark

Figures from the Bank for International Settlements (BIS) indicate that the take-up and usage of instant payments have progressed faster in Denmark than in other countries due to the high prevalence of instant mobile person-to-person payments, see chart 2.10

According to Danmarks Nationalbank’s survey, respondents choose MobilePay as it is easy to use and payments are settled instantaneously. Recent literature supports these findings as being essential for any new payment methods to be considered and adopted by the P2P-segment.11 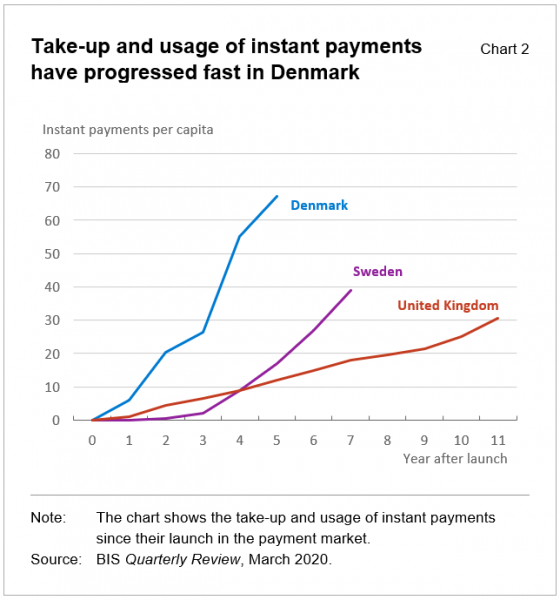 Danmarks Nationalbank has conducted its third survey of the payment behaviour of Danish consumers.12 The survey was performed by Kantar Gallup from 16 August to 17 September 2021 and is based on responses from a representative selection of 1,712 Danes aged 15-79 years.13

Respondents entered all their payments in a payment diary. For each payment, the respondent stated several details, including payment method and location, e.g. cash payments in physical trade or online MobilePay payments.14 In addition to the payment diary, each respondent answered a number of questions regarding their payment preferences, e.g. their preferred payment solution, online.

This report is based on responses from consumers, and from a consumer perspective, which makes it independent of the underlying technology. Hence, all payments for which consumers have used their mobile phones are recorded as mobile payments, even if the underlying infrastructure is a payment card, for instance an Apple Pay payment.

1.   ↑   See ECB Payments Statistics, July 2021 (link).
2.   ↑   See European Commission, Eurostat (link).
3.   ↑   See European Commission, Digital Economy and Society Index (link).
4.   ↑   Since 2014, all Danes above the age of 15 have been required by law to receive Digital Post from the public authorities and communicate digitally with the public authorities. For instance, Danes are required to check their tax statements digitally. Only a smaller group of individuals can be exempt from receiving Digital Post if they are unable to communicate digitally.
5.   ↑   See Jakob Mølgaard Heisel and Marcus Clausen Brock, Denmark is among the most digitalised countries when it comes to payments, Danmarks Nationalbank, Analysis No. 2, February 2022 (link).
6.   ↑   See Jakob Mølgaard Heisel, The use of cash in society, Danmarks Nationalbank, Analysis No. 3, March 2022 (link).
7.   ↑   Section 81 of the Danish Payments Act (in Danish only), see Consolidated Act no. 1024 of 3 October 2019 (link).
8.   ↑   European Central Bank, Study on the payment attitudes of consumers in the euro area (SPACE), December 2020 (link).
9.   ↑   Apple Pay is the only solution capable of using the Near-Field-Communication feature of the iPhone. Other solutions in physical trade tend to require several user interactions to complete a payment.
10.   ↑   Bank for International Settlements – Quarterly Review, March 2020 (link).
11.   ↑   See Study on New Digital Payment Methods, ECB (link).
12.   ↑   Danmarks Nationalbank previously conducted surveys of the payment behaviour of Danish households in 2017 and 2019.
13.   ↑   The survey is associated with a statistical uncertainty of +/- 2 percentage points for questions covering the entire group of respondents. The uncertainty is higher when broken down into age groups and sub-questions.
14.   ↑   In addition to cash and mobile payments, the survey covers card payments and person-to-person transfers and transactions in the form of pocket money or gifts.