Monetary policy strategies in the New Normal: A model-based analysis for the euro area

Make-up monetary policy strategies in which the central bank keeps the policy rate low for long to compensate for past inflation misses can be effective in stabilizing the economy and reducing the probability of hitting the effective lower bound. Their effectiveness hinges on agents’ inflation expectations being forward-looking. When the latter assumption is relaxed, the advantage of make-up strategies over inflation targeting remains, but it is smaller.

In the last two years, the Federal Reserve and the European Central Bank have reviewed their monetary policy strategies.2 The reviews were motivated by the need to adapt the strategies to a macroeconomic environment (“New Normal”) where the natural rate of interest is low and the risk that the policy rate hits its effective lower bounds (ELB), limiting the space for supporting the economy, is elevated. Both central banks acknowledged that persistently below-target inflation requires a persistent monetary policy response.3

In a recent paper (Busetti, Neri, Notarpietro and Pisani, 20214), we study the stabilization properties of monetary policy strategies alternative to inflation targeting (IT) in this kind of a low-natural rate environment. We use a medium-scale New Keynesian dynamic stochastic general equilibrium model calibrated on euro-area data, similar to Smets and Wouters (2003), widely adopted in central banks analyses.5 The alternative strategies are characterized as interest rate rules in which monetary policy responds to deviations of inflation from the target (2 per cent) and to output fluctuations. IT is compared to three so-called “make-up” strategies: (i) price level targeting (PLT), where the central bank responds to the deviations of the price level from a given target path; (ii) temporary price level targeting (TPLT), which is implemented only when the policy rate reaches its ELB; (iii) average inflation targeting (AIT). We consider two alternative assumptions on the formation of inflation expectations: they can be either rational (forward-looking), or “hybrid”, i.e. an average of rational and adaptive (backward-looking) expectations.

Figure 1 reports the impulse responses of the policy rate, inflation, output and the price level gap to a recessionary demand shock of the alternative monetary strategies under the benchmark case of rational expectations.6 The lower current and future aggregate demand induces firms to decrease the production and the price of goods. The central bank responds to the fall of economic activity and inflation by cutting the policy rate. Under IT (black solid lines), the policy rate hits the ELB: the real interest rate (not reported) correspondingly increases, amplifying the negative effects of the recessionary shock. Under PLT (red-dashed lines), households anticipate that the central bank could keep the policy rate “low for long” to achieve higher inflation in the future to compensate for the below-target inflation. Output and inflation fall by less compared to IT. The price level gap is stabilized and inflation remains close to its target. A TPLT strategy delivers similar results, although its effectiveness is lower compared to PLT as the central bank reverts to IT away from the ELB. Under AIT, the central bank targets a backward-looking average inflation rate and therefore responds gradually to the recessionary shock. Also in this case, households anticipate that the policy rate will remain persistently low. Under none of the three make-up strategies the policy rate reaches the ELB. 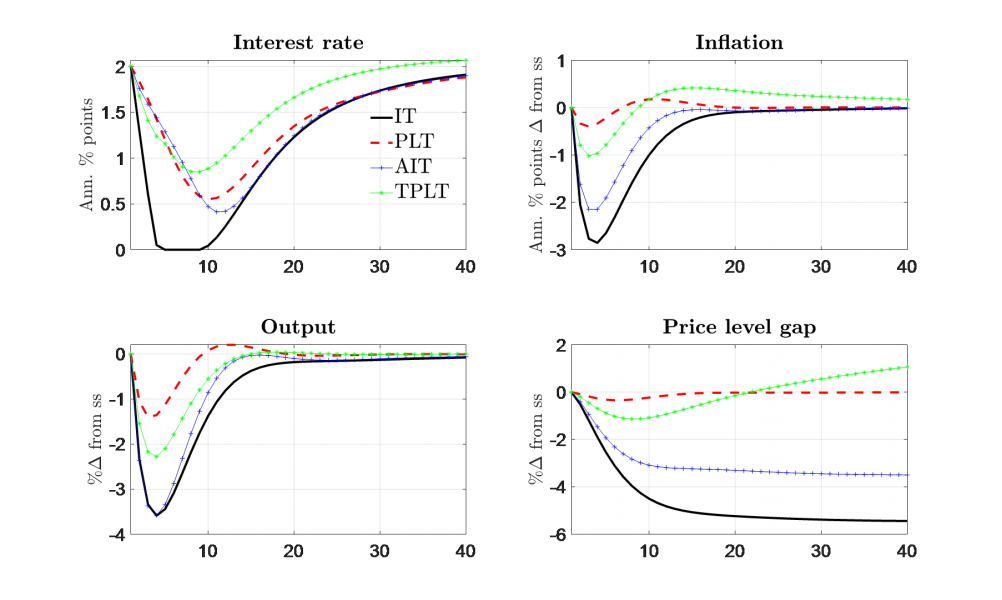 In Table 1, we provide a ranking of the alternative strategies in terms of the frequency of ELB episodes, the mean of inflation and output, and a quadratic loss function. The ranking is based on stochastic simulations in which the economy is repeatedly hit by demand and supply shocks. Under rational expectations (upper part of the table), PLT is the most effective strategy in stabilizing inflation and output, and reducing the frequency of ELB episodes. TPLT and AIT are also effective in reducing ELB episodes, although this comes at the cost of a lower mean output (reported as percentage deviation from its steady state level). 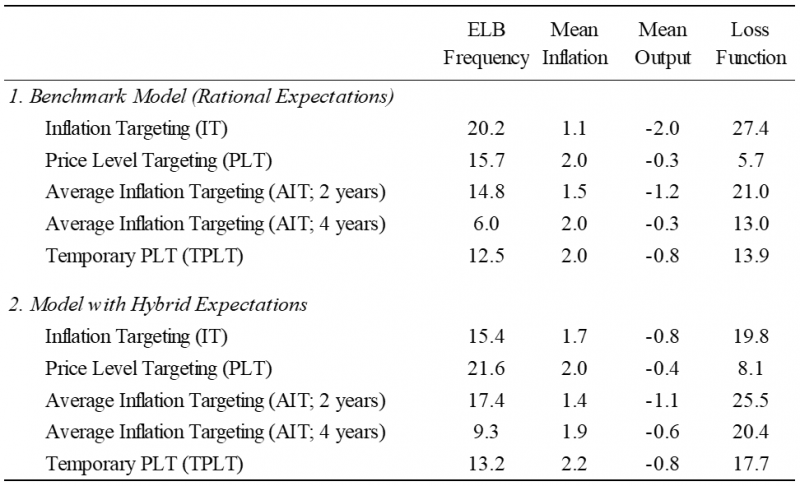 The effectiveness of make-up strategies crucially hinges on the anticipation effect implied by rational expectations.7 If agents’ inflation expectations are partly adaptive, incorporating the past-realized inflation rates, the efficacy of make-up strategies may be reduced. The lower part of Table 1 reports the results for the case of “hybrid” inflation expectations. Since households and firms are less forward-looking, they take into account the future consequences of a shock to a lesser extent compared to the case of rational expectations. For this reason, the make-up strategies, which imply a persistent degree of monetary accommodation under recessionary shocks, are somewhat less effective. A wider window improves AIT stabilization properties, in particular under hybrid expectations.

Our analysis highlights the important role that “low for long” policies can play in delivering price stability, in particular when agents’ expectations are forward-looking, as also shown by Bernanke et al. (2019) for the US.8 These policies can benefit from central banks’ communication aiming at steering inflation expectations and the economic behavior of both expert and non-expert audiences.