The Rise in Foreign Currency Bonds: The Role of US Monetary Policy and Capital Controls

An unintended consequence of loose US monetary policy is the increase in currency risk exposure abroad. Using firm-level data on corporate bond issuances in 17 emerging market economies (EMEs) between 2003 and 2015, we find that EME companies are more likely to issue bonds in foreign currency when US interest rates are low. This increase occurs across the board, including for firms more vulnerable to foreign exchange exposure, and is particularly strong for bonds issued in local markets. Interestingly, capital controls on bond inflows significantly decrease the likelihood of issuing in foreign currency and can even eliminate the adverse impact of low US interest rates. In contrast, macroprudential foreign exchange regulations tend to increase foreign currency issuances among nonfinancial companies, although this effect can be significantly reduced through the imposition of capital controls.

A striking feature of emerging market economies (EMEs) in the last decade has been the substantial growth in bond issuances by nonfinancial corporations in both local and foreign currency. A potential concern is that firms increase their foreign currency exposure, which contributes to financial instability. This concern has been fueled by the growing demand for corporate bonds issued in dollars. First, there is a search for yield due to low short-term interest rates in the US (e.g., see McCauley et al., 2015). Second, there has been a growing demand for dollar assets (e.g., Maggiori et al., 2020), which has led to cheaper borrowing in dollars. Lower borrowing costs increase the incentive to issue bonds in dollars despite the exchange rate risk. Are there policies that can limit this increase in systemic risk? Standard macroprudential policies may not be appropriate, as they typically focus on financial intermediaries. In contrast, there might be a role for capital controls.

Uncovering the causes of the trend: an econometric analysis

In Bacchetta et al. (2020), we shed light on these issues by using firm-level data on corporate bond issuances for EME companies and analyzing the determinants of foreign currency borrowing. In our sample about 25 percent of the bonds issued are denominated in foreign currency. The results show that companies are more likely to issue in foreign currency with more expansionary US monetary policy. A one standard deviation decline in the shadow fed funds rate is associated with a 3.35 percentage point increase in the share of foreign currency bonds. This increase occurs across the board, including in firms that are more vulnerable in terms of leverage, growth opportunities, foreign exchange exposure or size. Importantly, local bond markets are more affected, while bonds issued in international markets are predominantly in foreign currency irrespective of the stance of US monetary policy (Figure 1). 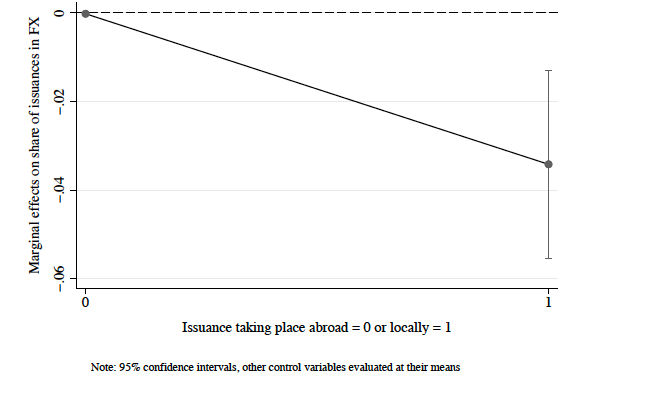 The empirical analysis is conducted on 17 EMEs over the period 2003-2015 using data from the SDC Platinum, Worldscope, and Orbis databases. We focus on the private nonfinancial sector and exclude all government-related companies. To assess variations in companies’ foreign currency exposure, we look at the proportion of corporate bond issuances denominated in foreign currency among companies that have issued bonds.

The role of capital controls

Figure 2. Capital controls tame the effects of US monetary policy 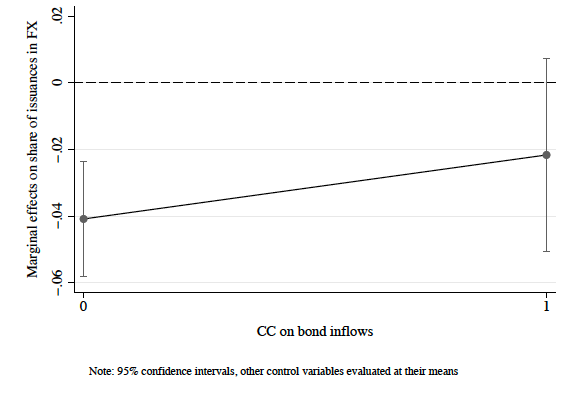 Looking at the role of macroprudential policies, we find that more FX regulations on financial intermediaries lead to a higher likelihood of issuing bonds in foreign currency, in line with previous findings by Ahnert et al. (2021) and consistent with the prediction that greater constraints on financial intermediaries cause nonfinancial firms to migrate to the bond market. This adverse impact is independent of the shadow Fed funds rate, and capital controls can significantly alleviate it. Data on capital controls are taken from Fernandez et al. (2016) and allow us to distinguish across various types of capital flows and to focus on controls on bond flows. For macroprudential policies, we use the databases of Ahnert et al. (2021) and Cerutti et al. (2017).

Figure 3. Asymmetric effect: Greater reaction of bond markets to loosening US monetary policy than to tightening 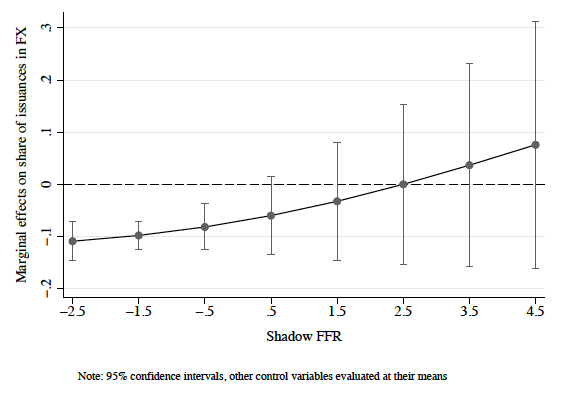 We also analyze how stock returns react to exchange rate fluctuations and find that higher currency indebtedness heightens exchange rate risk. But capital controls can significantly mitigate the vulnerability of firms to exchange rate fluctuations. Finally, to balance costs and benefits, we provide an analysis of the real effects of capital controls. We find a strong negative effect of capital controls on employment growth, especially for large firms. In contrast, other variables such as capital expenditure, sales growth and net debt are not significantly affected. Interestingly, the decline in employment is larger for firms presumably more exposed to the negative effects of capital controls: larger firms and firms more dependent on external finance.

Our results show that capital controls have more impact when US monetary policy is expansionary. However, is it desirable to actively use capital controls as prudential tools? This is not a conclusion that can be drawn from our analysis, and a welfare analysis of capital controls goes beyond the objectives of this paper. While capital controls can contribute to financial stability by reducing foreign currency exposure, they also have costs. In our sample, we show that they limit firm-level employment growth. Notice also that the available evidence is that capital controls are not countercyclical (Fernandez et al., 2016) and do not appear to influence financial variables or GDP growth (Klein, 2012), which suggests that policymakers have not systematically used capital controls on prudential grounds. This is an important issue for further research.

1.   ↑   The views expressed in this paper are those of the author(s) and do not necessarily reflect those of the SNB.