The global fall in inflation expectations together with increased fear of recession help to explain the downward trajectory in nominal government bond yields and the stock price dynamics of six major economies from 1988 to 2019. Fear of recession is the economic mechanism that drives asset prices in a model with consumption habits. We show that the habit model replicates well the long-run time series patterns of nominal government bond yields and price-dividend ratios for most countries in our sample.

One striking feature of international financial markets is the observation that nominal government bond yields of the major economies have almost steadily declined since the late 1980s. The fall in inflation expectations in the 1990s only partly explains this finding. Long-term real interest rates have fallen in many countries as well.

Most studies that aim at explaining falling (real) interest rates in the past thirty years (see Borio et al. (2017) for an excellent overview) do not explicitly assess whether their preferred economic explanations are consistent with the behaviour of other asset prices, e.g., equity.

There are notable exceptions (Hasseltoft, 2012; Farhi and Gourio, 2018; Miller et al., 2020), but they focus on the US. However, the US is not necessarily representative for other economies as illustrated in figure (1). The comparison between the US and Switzerland (CH) shows that cross-country differences in the joint dynamics of bond yields and stock prices seem to have been particularly pronounced since the global financial crisis.

We argue in a recent working paper (Nitschka and Satkurunathan, 2021) that the observation of lower nominal government bond yields after the great recession than before could reflect an increase in risk aversion internationally. The questions of whether this hypothesis is consistent with variation in stock prices and whether it explains cross-country differences in the joint dynamics of bond yields and stock prices are also addressed in our assessments.

The following assumptions and observations motivate our assessment. Risk aversion tends to be higher in recessions than in economic boom periods (e.g. Cochrane, 2017). Hence, if government bonds of the major economies are safe assets and stocks are risky assets, then business cycle dynamics must drive both bond yields and stock prices. If this is the case, then cross-country differences in the joint behaviour of bond yields and stock prices could simply reflect differences in the timing and the amplitude of business cycles. Moreover, Guiso et al. (2018) show that risk aversion increased substantially after the global financial crisis 2008-2009.1 Such an increase in risk aversion could generate the pronounced downward trajectory in bond yields (higher prices) after the great recession.

Bond yields and stock prices: one model to rule them all?

The main tool for our empirical assessments of the question of whether an economic mechanism based on time-varying risk aversion rationalizes the joint dynamics of bond yields and stock prices is the Campbell and Cochrane (1999) consumption habit model. The key variable in this model is surplus consumption, which is the difference between current consumption and the habit level of consumption of a representative investor. 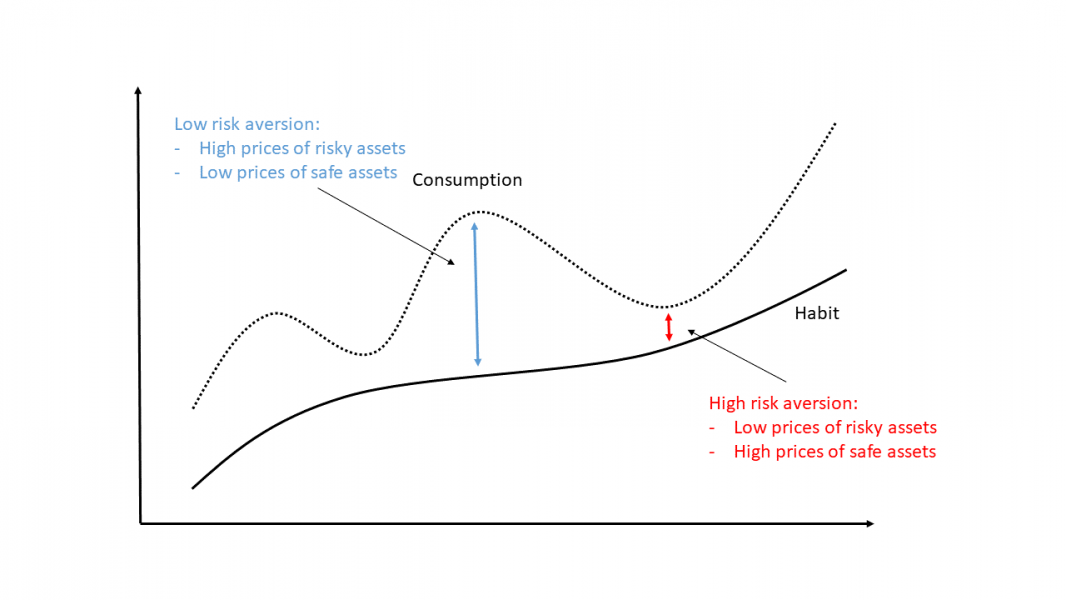 In a first step, we calibrate the habit model separately for each of the six countries in our sample (Canada, Germany, Japan, Switzerland, the United Kingdom and the United States). The calibrations aim at matching key moments on national bond and stock markets as closely as possible. In a second step, we feed actual consumption and inflation data from the first quarter 1988 to the fourth quarter of 2019 into the calibrated models to generate artificial time series of bond yields and ratios of stock prices to dividends for comparisons with their counterparts in the data. We follow Wachter (2006) and add exogenous inflation expectations to the habit model in order to compute nominal variables.

There are exceptions. One is Japan. This is not too surprising given the Bank of Japan’s long history of actively purchasing Japanese government bonds. Another interesting case is the US. The model-generated US bond yield strongly deviates from its counterpart in the data between the years 2010 and 2015. The model predicts rising yields on the back of the great recession while actual yields stayed low. One potential explanation for this observation is the impact of the Fed’s large-scale asset purchases on actual government bond yields.

Taken together, our results suggest that fear of recession is a driver of asset prices that helps to explain long-term movements in both nominal government bond yields and stock prices. Models that feature this economic mechanism, such as the consumption-habit model, provide a useful benchmark for explaining the joint dynamics of bond yields and stock prices internationally.

Wachter, J.A. 2006. A consumption-based model of the term structure of interest rates. Journal of Financial Economics 79, 365‑399.

1.   ↑   More generally, Malmendier and Nagel (2011) highlight that experiences of severe economic shocks, such as the great recession, lead to persistently higher risk aversion after the shock.
2.   ↑   An interesting exception is Switzerland because of a Swiss-specific real estate crisis at the beginning of the 1990s. This crisis had a negative impact on surplus consumption (and thus on the model-implied stock price) but actually left the Swiss stock market largely unaffected.