This policy brief studies the impacts of a reduction of capital the banks are required to hold when granting loans to Small and Medium Enterprises ("SMEs" hereafter). Starting in 2014 with the implementation of the European Commission Capital Requirements Directive, banks operating in the Euro area have benefited from a 25% reduction (the Supporting Factor or "SF" hereafter) in their own funds requirements against SME loans. This capital relief supported SME financing and was consistent with SME credit risk. Economic capital computations based on multifactor risk models confirm that capital requirements should be lower for SMEs. Taking into account the uncertainty surrounding the estimates and adopting a conservative approach, the SF is consistent with the estimated difference in economic capital between SMEs and large corporates. As for the impact on credit distribution, the changes in credit exposures benefiting from the SF over time, before and after the implementation of the SF relative to other types of exposures, show a positive and significant impact of the SF on the credit supply.

Small and medium-sized enterprises (“SME” hereafter) are a key driver of growth in Europe. They depend heavily on bank credit for external financing and are more likely to face financing constraints than other firms are. In a context of tighter banking regulation and increased capital requirements (“CR” thereafter) for banks, banks’ lending decisions have also become more sensitive to the regulatory framework. Thus, in 2014, the transposition of the Basel III rules into EU law introduced a 25% reduction in CR for SME exposures, referred to as the Supporting Factor (“SF” thereafter). This new regulatory tool assumes that such a reduction in CR should stimulate the supply of credit to these firms. Nevertheless, a necessary condition for the SF to be effective is that regulatory CR should be consistent with the underlying credit risk of SMEs.

A way to assess the intrinsic risk of SMEs is to compute banks economic capital using a structural credit framework taking into account the size of the firms. To set up banks capital requirements, the Basel Committee used the standard Asymptotic Single Risk Factor (ASRF) model (Gordy, 2003). In this framework, the computation of regulatory CRs requires using two parameters that capture firm’s individual risk -the probability of default (PD) and the loss given default (LGD) – and a third parameter – the asset correlation (R) – that measures the sensitivity of firms to a common single systematic risk factor. However, instead of leaving banks to compute this risk parameter using internal information, the Basel II/III regulation provides banks with the formulas to compute R. Therefore, banks determine their regulatory CRs through a model calibrated under regulatory constraints set up to deal with potential data availability issues.

We amend this model along two dimensions.1 First, we do not have recourse to the regulatory ad hoc calibrated formulas but let the data speak in order to measure the sensitivity of firms to systematic risk factors. Second, we expand the regulatory ASFR model by using a multifactor model where firm size acts as a systematic risk factor: firms of different size are now sensitive to a size-specific systematic risk factor. Our analysis shows that the economic capital ratio associated to SMEs is about six times lower than the one associated to large corporates. By contrast, the regulatory capital ratio associated to SME is similar to the one associated to large corporates. Also, the largest companies are the most exposed to systematic risk, i.e. to general economic conditions, even if their default rates are low. SME exposures allow banks‘ portfolio benefiting from a diversification effect: while the medium and large enterprise classes are highly correlated with each other, the correlations are negative or very low between the small and medium/large enterprise classes. The SF makes the regulatory CR more consistent with this diversification effect by reducing the capital charge on SME loans. There is obviously some model uncertainty in economic CRs measurement. Taking into account uncertainty surrounding the estimates of the multifactor models and adopting a conservative approach, the SF is shown to be consistent with the difference in economic capital between SMEs and large corporates.

To assess the effectiveness of the Supporting Factor regarding the provision of credit to SMEs, we rely on a difference-in-differences framework. We exploit a SF eligibility condition to define a treatment group composed of eligible exposures of SME bank pairs with total outstanding amounts below EUR 1.5 million and a control group composed of (ineligible) exposures of other SME-bank pairs. Our results show that eligible exposures increased by 5% to 10% on average compared to ineligible exposures after the implementation of the SF (compared to before the reform). We also find that the magnitude of the SF effect increased over time to reach a magnitude of 8% to 10% two years after its implementation. Regarding the heterogeneity of the impact, the effect of the SF appears to be much larger on eligible exposures of small firms and, in particular, micro firms, as well as on exposures of SMEs without credit ratings.

Figure 1: The effect of the SME-SF on credit supply over time 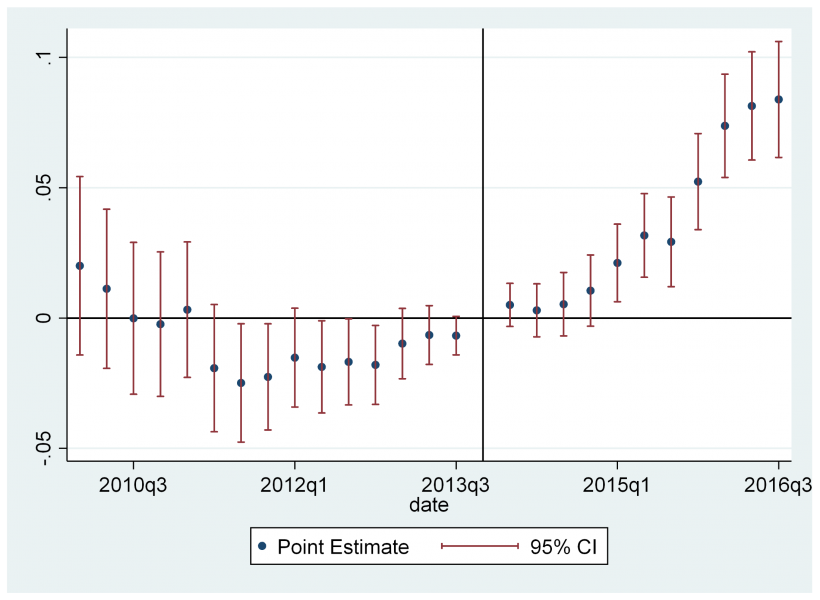 Note: This figure shows the estimates associated to the difference-in-differences specification. This specification assesses the effect of the SF on credit supply to SMEs quarter after quarter. The blue dots refer to the point estimates associated with the difference in credit distribution between eligible SMEs and ineligible SMEs within each quarter. The red bars indicate the 95% confidence intervals associated with these point estimates. The vertical line indicates the implementation of the SF reform, in January 2014. The underlying econometric specification controls for size, rating, department and industry classes, as well as year-quarter FEs and it includes bank, bank-time and firm FEs. Source: Banque de France, authors’ calculations. Sample: Independent SMEs that borrow from one of the 7 main French banking groups over the period 2010-2016.

Dietsch, Michel and Petey, Joël (2004). "Should SME exposures be treated as retail or corporate exposures? A comparative analysis of default probabilities and asset correlations in French and German SMEs," Journal of Banking & Finance, vol. 28(4), pages 773-788.

1.   ↑
See Dietsch, Fraisse, Lé and Lecarpentier (2020) for a detailed description of our methodology and results.